Veteran British Actress Imelda Staunton Reigned Supreme At The U.k. Theatre Awards On Sunday (18oct15) Thanks To Her Stunning Turn In Musical Gypsy. 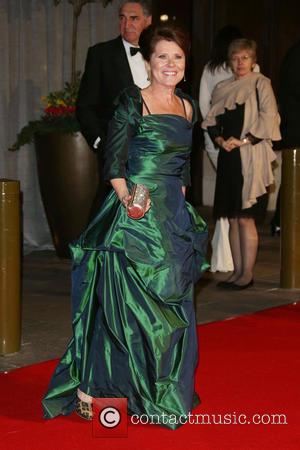 The Harry Potter star made her debut in the revival of Stephen Sondheim's classic last year (14) for the Chichester Festival Theatre, and she has continued to earn rave reviews following the production's recent transfer to the West End.

Her work in the Chichester Festival Theatre run was celebrated at Sunday's (18Oct15) U.K. Theatre Awards, which honour the best stage shows outside of London, as Staunton was awarded the best performance in a musical prize.

She was unable to attend the ceremony as she was resting her voice on her day off, but Chichester artistic director Jonathan Church was on hand to accept the prize on her behalf, as well as pick up the coveted trophy for best musical production.

"U.K. Theatre embraces the whole range of theatres she feels passionately she created some of her finest performances in," Church said of Staunton during the ceremony at London's Guildhall. "And of course the (government) subsidy that enables those theatres to exist is important to her - she wanted that message to be heard."

Meanwhile, there was a tie for best performance in a play between Joel MACCormack for Each His Own Wilderness at the Orange Tree Theatre, Richmond, and Polly Lister for Abigail's Party, at Theatre by the Lake in Keswick.

Special honours were handed to Dame Eileen Atkins, who received the Gielgud Award for Excellence in the Dramatic Arts, and director/choreographer Matthew Bourne, who was given the Stage Award for Outstanding Contribution to British Theatre.