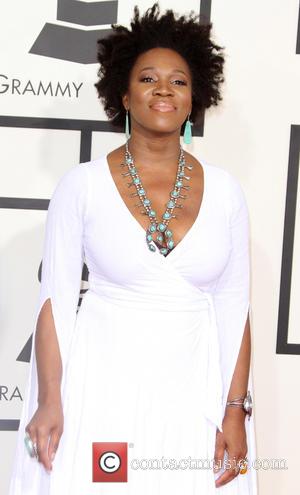 India Arie has been quick to squash reports of a rift between herself and Lady GaGa after a member of the Poker Face singer's security team swatted her hand away when she attempted to catch her friend's attention on the red carpet at the Grammy Awards on Sunday (08Feb15).

The singer took to Twitter to share the embarrassing run-in with fans, and quickly realised she may have sparked talk of a new music feud.

She wrote, "when I reached to speak to @ladygaga her security swatted my wrist - clapping something hard against my turquoise bracelet."

Gaga's fans lashed out at her for the tweet, prompting India Arie to clarify her comments and insist she's convinced her friend had no idea who was reaching out to her.

She adds, "Lets squash this now - everyone responding to my @ladygaga tweet - i know her i wanted to speak like did everyone else i saw i know (sic). Her security swatted my hand - She didn't see me. And my point is not @ladygaga my point is - this is the energy of the hollywood bubble. I give and expect respect - but some people aren't like that - and yes I was upset because @ladygaga security guard Touched me.

"I was Not upset because @ladygaga didn't See me. I don't like being touched aggressively. Period... Thats it #Grammy2015 interesting times. A Lot of fun too. But thats personal time with real friends (sic)."