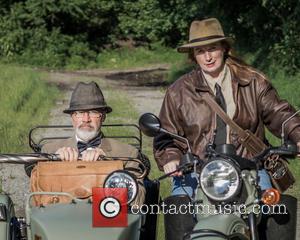 Picture: Ken Thomas and Vicki Thomas - "It's not the years, honey, it's the mileage," is the perfect Indiana Jones quote to sum up this celebratory...

INDIANA JONES' whip, a corset worn by Madonna, and a sign from Bond movie Skyfall are among the items set to go under the hammer at a massive memorabilia auction in London later this month (Nov12).

The kangaroo hide bull-whip, which was famously wielded by Harrison Ford as Indiana Jones in the first three movies of the adventure franchise, is expected to fetch up to $23,000 (£15,000) at the Christie's sale, which features a huge range of music and movie items.

A prop chalice which was prominently featured at the end of Indiana Jones and the Last Crusade is also for sale, along with a house sign featured in new James Bond movie Skyfall, and Madonna's stage outfit, which was created by famed fashion designer Jean-Paul Gaultier for her famous 1990 Blonde Ambition tour. The corset is expected to make up to $24,000 (£15,000).

Other music memorabilia in the sale includes the remains of a bass guitar smashed by Kurt Cobain in Nirvana's video for Smells Like Teen Spirit, two watches once owned by Elvis Presley, a grey shirt worn by The Beatles star John Lennon, and a flamboyant jumpsuit worn on stage by Sir Mick Jagger.

There are also stage costumes worn by pop stars Katy Perry and Britney Spears, and a pair of Bono's sunglasses.

Other Bond items for sale include a sunlounger featured in 1964's Goldfinger and a watch seen on Pierce Brosnan as 007 in Tomorrow Never Dies.