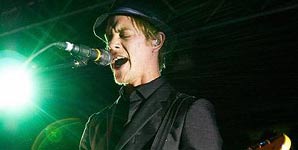 Opening up for any established artist can be difficult enough at the best of times, but to go on before the largely partisan fan base of Interpol and appease the restless in waiting takes some bravado. Credit to Ladytron then for pulling it off with such aplomb, that at times one almost forgets theyâre not actually headlining tonightâs show. Expanded to a six-piece for the live show they may be, but all eyes firmly remain on synth-and-vocals front women Helen Marnie and Mira Aroyo, and they respond in quite an uncharacteristic (by previous standards) fashion. Gone are the dour-faced, ice maiden stances of old. Instead, Aroyo and Marnie spend most of the set dancing around their many machines in a joyously playful mood that is both engaging and warming to boot. The majority of tonightâs set is lifted from recent album âVelociferoâ â âRunawayâ in particular sounding like the futuristic pop smash Sheffieldâs first bastions of electronica royalty The Human League never got to write, while the closing âDestroy Everything You Touchâ is like a transcendental voyage between the Pet Shop Boys back pages directed by Kevin Shields.

The audience guessing game of what Interpol are going to open with is in full swing long before their entrance on-stage. Then thereâs the debate as to whether or not theyâll play any new material for what is only their second actual headline show on these shores in twelve months, and at this moment in time their last one bar festival appearances in 2008. Its been a strange year or so for the New York quartet, not least because of the mixed bag of reviews most recent long player âOur Love To Admireâ received, not to mention singer Paul Banksâ high profile persona as the current beau of original supermodel Helena Christensen. Although tonightâs low key show may only be billed as a warm-up for their impending festival slots, it only takes a few bars of opener âPioneer To The Fallsâ for it to sink in that Interpol really mean business this evening.

Dressed in their now customary suits - bassist Carlos Dengler back to his clean-shaven and debonair best with Banks in matching trilby looking particularly sophisticated â this is the Interpol that first made people sit up and notice back in the summer of 2002 and whose first record âTurn On The Bright Lightsâ is quite rightly held in such high esteem as THE definitive record of the decade. Although a large chunk of tonightâs set is taken from âOur Love To Admireâ, the reception given to the likes of âPDAâ, âRolandâ and the double whammy of âNYCâ and âObstacle 2â during the encore speaks for itself. Whatâs also quite apparent this evening is that Interpol seem to be enjoying themselves, something you donât hear too often, and the way Dengler shimmies across the stage with guitarist Daniel Kessler is a sight to behold, not least because the likes of âRest My Chemistryâ and âHands Awayâ werenât exactly borne for the dancefloor.

The highlight of the set â aforementioned encore aside â has to be a stunning version of recent album closer âThe Lighthouseâ that initially features just Kesslerâs incendiary glissando guitar and Banks whispered vocal, before the rhythm section join the band for the climax that crescendos into a halo of white noise before drifting nonchalantly into a rapturous âNot Even Jailâ.

The only real downside â if you can call it that â is the omission of long-standing favourites âStella Was A Diverâ¦â and âSpecialistâ as well as no new material being aired, but then when you possess a back catalogue as near to faultless as the one Interpol do, there is only so much that can be fitted into ninety minutes so a certain tinge of disappointment is inevitable. Other than that minor gripe, Interpolâs performance was nothing short of sensational and those of you lucky enough to have tickets for this and next weekendâs T In The Park and Latitude festivals are in for a treat.