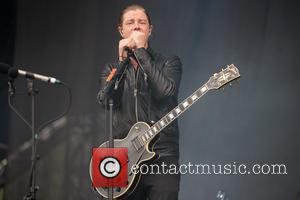 Cult rockers Interpol are slowly making their way to their next gig in Boston, Massachusetts on Friday (21Nov14) after spending more than two days stranded in a snowstorm in New York.

The Evil hitmakers had to spend over 50 hours holed up in their tour bus on Tuesday (18Nov14) and Wednesday (19Nov14) after a blizzard in Buffalo brought their vehicle to a halt, forcing the group to pull two dates in Canada.

Their driver was able to get back on the road on Thursday (20Nov14), but progress was slow as they encountered closed roads, as more snow started to fall.

Bandmate Daniel Kessler kept fans updated on their status via a series of pictures and posts on Twitter.com.

He later added, "Ahoy, held up in Buffalo until they open up some roads and we see how bad the forecasted (sic) storm is today. Hoping to continue onwards!

"Thinking of our man Red who is transporting our gear and still held up on the road. Hot damn."

Interpol's supporting band, Hundred Waters, have also been caught up in the Buffalo snowstorm, which left them no choice but to axe a planned appearance on America's The Late Show with David Letterman on Wednesday (19Nov14).