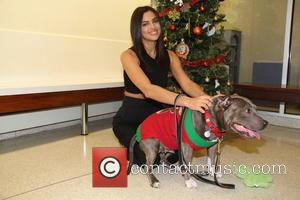 The Real Madrid star was accepting the prestigious FIFA Ballon d'Or award in Zurich, Switzerland on Monday (13Jan14), when the World Player of the Year honouree gave thanks to his colleagues, friends and family.

He delivered his emotional speech in Portuguese and was translated as saying, "I am very happy, it is very difficult to win this award.

"Everybody that has been involved with me on a personal level I have to thank. My wife, my friends, my son. It is a tremendously emotional moment."

However, Shayk's spokesperson has dismissed claims of a surprise wedding, insisting, "The translator just changed it (girlfriend) to wife."

Shayk accompanied her boyfriend of four years and his son from a previous relationship, Cristiano, Jr., to the ceremony, and the beauty later gushed about Ronaldo's win with a photo of the couple on her Facebook.com page, alongside the caption, "Couldn't be more proud."