Isla Fisher turned her hand to script writing after growing frustrated over the lack of decent comedic material for actresses. 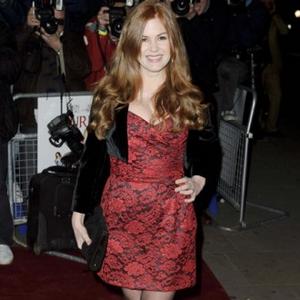 Isla Fisher was so frustrated at the lack of comedy material for actresses that she wrote her own script.

The 'Wedding Crashers' actress - who is married to 'Borat' creator Sacha Baron Cohen - felt the only way she could get a good role was to pen the in-development 'Groupies', which she will co-star in with Amy Poehler.

When asked how her script is developing, Isla replied: "Oh you mean 'Groupies'? After 'Wedding Crashers' I was just surprised as to the lack of comedic female material there is. So I had to start working and getting stuff out there for myself.

"'Groupies' is pretty close to being ready and I've got another movie called 'Life Coach' which I've been working on. Hopefully one of them will go soon. It's more frustrating being in development than it is just to be cast in something. It's a lot of things involved."

The movie follows Isla's and comedienne Amy's rock groupie characters, and the pair are also set to executive produce.

This isn't Isla's first foray into writing - the 35-year-old actress has also written two novels but has previously revealed she has no plans to return to her old job.

She said: "I'm not writing trashy chick lit anymore. I wrote 'Groupies' with Amy Poehler and since then, I developed another project. So, I'm still being creative and moving more into production, and making sure I have a little bit more power and control over my career."