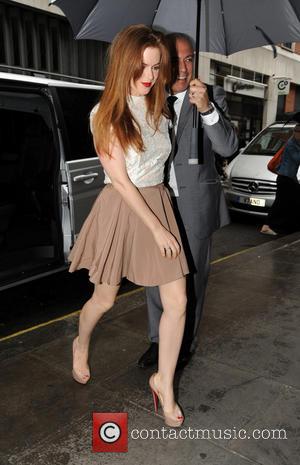 Isla Fisher was on hand to discuss her new film, Now You See Me, to media personelle and a handful of lucky fans at London's Apple Store on Regent Street this week (June 19), with the actress discussing the new thriller alongside her co-star Jesse Eisenberg. The two spoke at length about what we can expect from the film and have since spoken to various UK press outlets about the film in the run-up to it's UK release.

Wearing a form-fitting grey dress as she chatted about the flick - which is currently performing well in US cinemas - to a group of lucky fans, the 37-year-old actress has discussed some of the difficulties she faced during filming, including one near-fatal stunt that almost drowned her. The actress has discussed her life-threatening situation before, and at the Q&A she talked about it in further length to the shock audience. She told the Mail on Sunday last month, "They had a guy who was off camera, but he was a long way away with a can of oxygen. By the time I realised I couldn't get up and beckoned for him, I realised that I had run out of air."

Watch the trailer for Now You See Me

The film, which has received a lukewarm reception from critics, follows the most formidable magician troupé ever seen, The Four Horsemen, who are able to pull off some of the most baffling illusions ever seen and decide to use their talents to outwit the highest authorities of the country and give something back to their loyal audience at the same time. At one particular show in Paris, they announce that they will rob a Parisien bank and subsequently distribute the cash amongst their fans whilst using their ability to expose the white collar crimes that have been going on in the underground financial world. While this is happening the FBI flounder around trying to work out how the trick is done, bringing in magic genius Thaddeus Bradley to give them an idea on how they managed to do their trick.

See more picture of Isla at the Q&A Check out our gallery of Isla at the Apple Store The actress had a near-death experience on the film