Review of Tied To A Star Album by J Mascis

If there's one word that I didn't ever think I'd use to describe a J Mascis album, it's beautiful. But, in essence, that's what his new solo outing, 'Tied To A Star', is. That may be a bitter pill to swallow for some Dinosaur Jr fans, but here Mascis shows that he's just as adept at crafting acoustic beauty, as he is bone-crunching noise. There's some consolation for those less inclined towards the quieter side of the spectrum, with occasional electric flourishes, but crucially this is an effective showcase for Mascis' talents as a songwriter and guitarist. As you'd expect, there's plenty of catchy hooks to be found here, perhaps the most pleasant surprise though is Mascis' vocal. While still maintaining his angst-ridden lilt, he tackles some sections in a higher register than usual. Indeed, at times he sounds somewhat similar to Joseph Arthur by adopting a softer delivery. There's also a subtle sense of humour lurking beneath the heartfelt compositions. Maybe it's just me, but there's a certain irony that the duet with Cat Power, 'Wide Awake', sounds the most like a lullaby.

Lyrically, there's a certain amount of soul searching, 'Heal The Star' for example features the line "I could use a bit less doubt". However, it's certainly not an overwhelmingly depressing record, despite the subdued mood. The instrumental 'Drifter' demonstrates a carefree campfire sensibility, thanks in part to the percussion used. It's those elements that are gradually introduced behind the acoustic guitars that elevate the album beyond a navel-gazing exercise. Indeed, 'Come Down' utilises a distortion-laden guitar as backing throughout. But for the most part, the songs build to these added instrumental touches, which never feel distracting from what's come before.

If there is a criticism to be made about 'Tied To A Star', it's that the tracks languish in such delicate songwriting that they all seem to bleed into each other. Certainly, the album is front-loaded with the most memorable compositions, much of the rest of the record simply washes over you seamlessly. That's not necessarily a bad thing when the prevailing sentiment seems to be self-reflection. But there's almost a feeling that Mascis is afraid to make any bold statements. Even some of the song titles seem deliberately designed to be overtly ordinary; 'Me Again' and 'And Then' both spring to mind.

But really those are only minor concerns, when an album sounds so beautiful and features such accomplished guitar performances, it's difficult not to fall under its spell. Mascis may be overtly sentimental on 'Tied To A Star' (the opening song 'Me Again' makes this very clear, very quickly), but he's lost none of his mercurial spirit by unplugging many of his instruments. It's not a significant departure from his previous solo record, but it establishes that this may well be a path he continues to travel down as an alternative to the sound he's most associated with. Certainly, if he does, the results will be worth listening to. 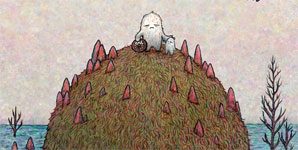 J Mascis - Several Shades of Why