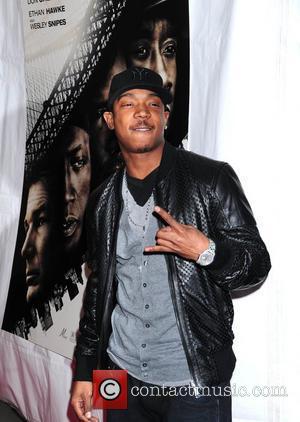 Incarcerated rapper Ja Rule is facing disciplinary action after breaking prison rules by calling two radio stations on his birthday.
The artist, who is serving a four-year sentence for tax evasion and illegal weapons possession at the Mid-State Correctional Facility in New York, called DJ Gary Spears of Kiss-Fm and Sirius XM personality Renada last Wednesday (29Feb12) to mark his 36th birthday - and chatted about his latest album and life behind bars.
But the calls have landed the star, real name Jeffrey Atkins, in trouble - because inmates are forbidden from conducting interviews.
The star's representative, Melanie Bonvicino, has since jumped to her client's defence, insisting she's the one to blame for setting up both chats, confessing the Always On Time hitmaker had "no prior knowledge" of the interviews and she orchestrated both as a birthday surprise.
And now Bonvicino is asking officals for leniency so "model prisoner" Ja Rule doesn't have to pay for her mistake, reports the New York Daily News.
The troubled hip-hop star began a two-year prison term in June (11) after he was convicted of weapons charges relating to a 2007 arrest. The following month (Jul11) he was handed an additional 28-month sentence for failing to file a number of income tax returns.