Modern music legend Jack White is back with his second solo album 'Lazaretto', following up 2012's 'Blunderbuss'. The former White Stripes main man has spent pretty much all of his career freshening up old style genres such as country and blues with a modern twist to bring them back into the mainstream and, listening to 'Lazaretto', it appears White isn't done with that mission just yet. 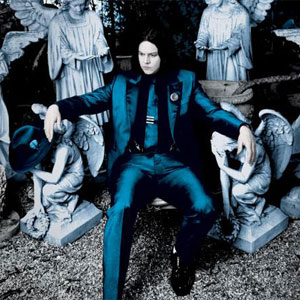 'Three Women' is an incredibly danceable song upping the giddiness for the rest of the album with upbeat piano parts that are just as exciting as any of the riffs or guitar solos on the track. The title track is brilliantly bizarre, with 8 bit elements mixed with White's sassy vocals, a fuzzy guitar solo and a fiddle piece at the end. The bridge is phenomenal, sounding like 'Game Over' on a retro video game mixed in with White mechanically singing, 'They wanna blow down in prison, they're lighting fires with the cast of the masses and like the dough I don't fall down, I'm so Detroit, I make it rise from the ashes'. The album calms down when it comes to 'Temporary Ground' which is a gentle country number with more relaxing female vocals and the fiddle being ever present, though this time more peaceful and in line with the mood of the rest of the song. 'Would You Fight For My Love' takes a slight return to the strange with spaghetti western guitar bends that tie in well with an emotional piano-led ballad. Twisted instrumental 'High Ball Stepper' builds up with sparse piano and a groovy palm-muted riff, then the fuzz kicks in like a sucker punch, rendering the listener's jaw well and truly dropped.

The calmness returns in the second half of the album. 'Just One Drink' is cool and upbeat, with energetic but light piano. 'Alone In My Home' and 'Entitlement' are equally pleasant to listen to, even if they are bordering on the generic. These songs are by no means bad; in fact, they're great, with White's unmistakable voice taking a more childlike tone that it has been known to do; and while they demonstrate White's diversity, they're not quite as exciting as the more blues rock tunes, where the electric guitar has a firm presence.

'That Black Bat Licorice' injects some groove back into the album with White spurting out lines like 'Good for the needy, like Nietzsche, Freud and Horace, but I'm skin, flint, broke, making no money, making jokes', accompanied by speedy light piano keys and more fuzzy guitars. Closer 'Want And Able' is the strongest of the quieter tracks on the album with the memorable repetition of 'Who is the who, telling who what to do?'. You don't even know what that's meant to mean, but it just feels like such a charming line, especially with the strength of which White sings it.

This is a fantastic album that sees Jack White display a variety of moods and sounds, throwing some curveballs into the record in the process. While there are no bad songs on the album, there are just a few that don't come across quite as amazing as some of the slightly stronger tracks. I'm talking about 'Alone In My Home' and 'Entitlement' and you kind of wish that, instead of these, he had some more rocky and experimental numbers in their place. That minor nag aside though, listen to this album whether you're a Jack White fanboy/girl or new to White, as this album is another work of brilliance this fine artist has under his belt.