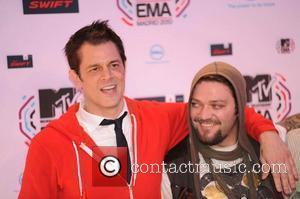 Jackass star Bam Margera was knocked out cold by a woman after poking fun at her friend's weight during a boozy night out at the South by Southwest festival in Texas.
The stuntman and reality TV star took offence when someone said "something rude" to him at an event on Thursday night (17Mar11) and he fired back by taking aim at one of the "drunk's" "big girl" friends.
Margera tells Tmz.com, "I called her a sea otter and asked her why she's in Texas. She should be in Alaska laying on an iceberg because she's a beached whale."
The woman's friend turned on the star and punched. As Margera fell to the ground, the woman delivered another blow that knocked him out.
Margera tells the website he was out cold for seven minutes and came round "covered in blood" and with a black eye. Someone also made off with his $500 (£312) bracelet.