Martial Arts Star Jackie Chan Has Been Inspired To Work With His Son Jaycee On A New Movie And Album After Admiring Will Smith's Parenting Skills On The Set Of The Karate Kid. 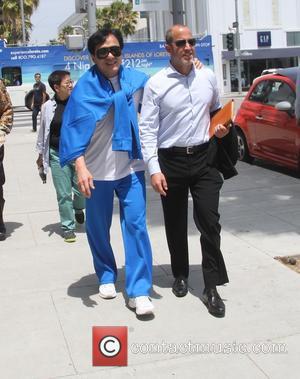 The Rush Hour star admits he had previously shunned the idea of collaborating with Jaycee, because he wanted the 32 year old to find his own way as an actor and singer in the industry, but after his son was imprisoned for a drug charge last year (14), Chan knew it was time to change.

He tells The Associated Press, "I was too Chinese, traditional (in my parenting) - 'You, son, go away, I don't want to help you, you have to help yourself.'"

The action star reveals he had watched how Smith was nothing but encouraging to his teenage son Jaden Smith as the child starred in 2010's The Karate Kid remake, opposite Chan, and it struck a chord with him.

The Chinese actor has since recruited Jaycee to produce his upcoming album, and he is keen for them to duet on a song which will feature an apology from father to son.

Chan is also on the look out for the perfect film for them to star in together as they continue to rebuild their fractured relationship.

However, Chan believes Jaycee's six-month term behind bars, which ended in February (15), turned out to be a good thing, because it gave the youngster time to reflect on his behaviour and force him to mature.

Likening the prison time to a vacation, he jokes, "So many rich people, like some of my friends, they take 10 days or a month to the mountain to purify.

"I think sometimes I should set up the jail holiday, force some rich people, even myself, to go to jail. These days all the people need to do this because they're so busy."