Jaden Smith On Emancipation: "I'm Staying In This House For 30 Years!"

Jaden Smith says he can't move out until he comes bigger than his famous father! 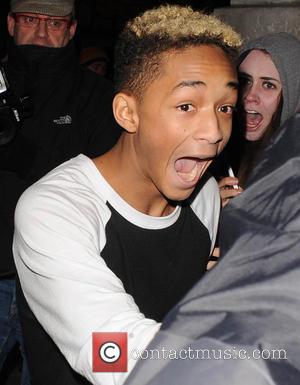 Picture: Jaden Smith - Jaden Smith is mobbed by fans as he visits Justin Bieber at his hotel on his birthday - London, United Kingdom -...

Remember that whole Jaden Smith wants to be emancipated from his millionaire parents thing? Yeah, he was joking - he's not going anywhere. Following reports that the 14-year-old had told parents Will Smith and Jada-Pinkett Smith he wanted his own house for his 15th birthday, Jaden made an appearance on the Ellen Degeneres show on Wednesday and shot down the speculation.

"I just heard you are trying to become emancipated, is that right?" the talk show host asked Jaden. "See, here is the thing that you need to understand - I'm not going anywhere," he replied, "The thing that people don't get is everything at this house is free. So I can get anything and everything at his house so I'm going to be there 20, 30 more years."

Jaden stars alongside his father in new sci-fi movie After Earth and he concedes that things may change once his film career takes off. "He says as soon as I have a movie that's bigger than one of his movies, I can get my own house," Jaden joked. It's probably going to difficult for the 14-year-old to achieve that feat anytime soon - Will is easily in the top five movie stars in the world - though in 10 years who knows?

Oh, so where did the emancipation story come from? "I think I made a joke in Tokyo. I mean, my baby boy he's never leaving me, ever," Will told Ellen. "No emancipation for the Smith kids."

Watch the After Earth trailer here!