Jaden Smith Freaked Out By Bug 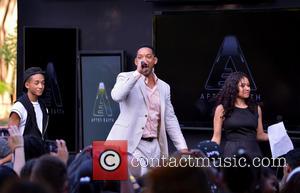 Teenage star Jaden Smith freaked out during a junket interview for his new film After Earth at the weekend (17May13) when a giant bug rested on the arm of his chair.

The actor was promoting the film under a tent in the New Mexico desert with his dad and co-star Will Smith when he suddenly leaped up with a start and yelled, "Dad!".

A cool, calm and collected Will swatted the bug away and then repeated, "Jaden, it's not a stinger," to assure his concerned son, who couldn't run far because his microphone was attached.

The youngster then tried to kill the bug with his skateboard as cameras rolled.