Jaime King wants to give her unborn baby a ''classic and eclectic'' name that isn't ''too out there''. 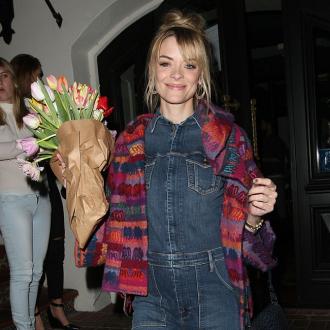 Jaime King doesn't want her child to have a ''Hollywood'' name.

The 'Sin City: A Dame to Kill For' actress is due to give birth to her and husband Kyle Newman's second child - a sibling for 20-month-old James Knight - next month and though she has settled on part of the baby's moniker, she is looking for something ''classic and eclectic'' to complement the first name.

She said: ''I know the first part. We just have to decide on the second part.

''Names are never easy, you don't want something to be too Hollywood and out there.

''I want my child to feel strong in life and in business and what they do, but it's still romantic at the same time ... It's not easy, but I like classic and eclectic mixed together so it's a bit of both of my worlds at the same time.''

Though Jaime is ''excited'' about having two children close in age, she admits she is feeling ''very nervous'' about having to carry so much equipment and supplies around to fulfill the needs of both kids.

She told People magazine: ''A lot of people who have babies close in age say that they're very, very close -- I'm excited about that part.

''I'm excited that they get to grow up so close together and hopefully be best buddies...

''Double strollers make me very nervous. They're big. They're really big. Double everything. I mean two is a lot of baby stuff.''

The 36-year-old actress and her husband have been working hard to prepare their baby's nursery, but want their older son to know he is welcome in the room too.

She said: ''For me, it was really important to create a nursery which felt like we could want to be in there as adults and James Knight would have a space in there. I didn't want him to feel like that wasn't his room as well.

''We have this great little play table that's for his age and a teepee for him and his little colouring books.

''[We're] doing everything that we can to make sure that he knows that he's always included in his little sibling's life in every way, shape or form. Hopefully, they'll form that bond through the beginning and he won't ever feel isolated in any way at all.''