Tweet: "Wow! @taylorswift13 LT's 1st bday already?! He sends kisses & a bangin' 2 teeth smile to his Godmother in Oz. We (heart) u!" Actress/model Jaime King marks her son Leo Thames' first birthday by sending a sweet message to his godmother Taylor Swift. The singer is currently in Australia as her boyfriend Tom Hiddleston films Thor: Ragnarok.

Fact: Model and actress Jaime King recruited her two young sons for a Marie Antoinette-themed fashion shoot with photographer Tyler Shields'. The Pearl Harbor star was joined by her sons James Knight, two, and four-month-old Leo Thames for the project. King dressed up as the French queen for the picture, which is part of Shields' Decadence series. Isabelle Fuhrman, Lydia Hearst, Tallulah Willis, Christa B. Allen, Shoshana Bush, Logan Huffman and Madison Paige were also part of the Decadence series.

Fact: Actress Jaime King and her husband Kyle Newman have named their newborn son ​Leo Thames Newman. The tot, the couple's second, was born on 16 July (15). They are also parents to James Knight, 21 months.

Quote: "People have made comments about how I'm too thin and need to eat a sandwich. I've seen it happen with other pregnant women in this business too - we're either too thin or put on too much weight. But every woman's body is different... all that matters is that you're taking care of the nutrition for yourself and your child." Mum-to-be Jaime King refuses to listen to criticism about her pregnancy figure as she awaits the birth of her second child.

Tweet: "Too pregnant! But my name would be Gun in the Oven or Immaculate Conceptionator what u think." Jaime King insists she's too pregnant to appear in pal Taylor Swift's all-star new video for Bad Blood, which will premiere during the Billboard Music Awards on Sunday night (17May15). Swift has revealed longtime best mate Selena Gomez will be making an appearance alongside models Cindy Crawford, Karlie Kloss, Lily Aldridge and Martha Hunt and actresses Lena Dunham, Ellen Pompeo, Jessica Alba and Mariska Hargitay, among others.

Tweet: "#PrayForMamaSwift We love you Taylor, Austin, mama and daddy Swift." Actress Jaime King offers positive thoughts to her pal Taylor Swift after learning the singer's mother has been diagnosed with cancer.

Quote: "There was no thought behind it at all other than that I always knew she was going to be the godmother if I had another baby. It's because she's incredibly thoughtful. Choosing a godmother is a very sacred and important thing in our family. They're going to be guiding your child, and they're responsible for them if something was to ever happen... That's why I feel like she's going to be the perfect godmother." Pregnant actress Jaime King on choosing pal Taylor Swift as her unborn baby's godmother.

Quote: "She's like a sister to me... Having her by my side through this process has been so important to me. There's something very calming about her presence." New mum Jaime King on best pal, singer Lana Del Rey.

Fact: Pregnant actress Jaime King has shown off her baby bump by posing in a skimpy bikini for a picture posted on her Instagram.com page.

Tweet: "To all the media outlets printing that we are having a girl, that is false! We don't know- we want a surprise. Please check facts first." Pregnant actress Jaime King denies speculation she knows the sex of her unborn child.

Tweet: "My girl Jaime King and I committed the ultimate fashion crime. Showing up at the Same event in the Same dress." Stylish socialite Nicky Hilton was left red-faced at a fashion event on Wednesday (09Mar11), when she turned up in the same outfit as actress Jaime King.

Fact: Actress Jaime King is about to wow the world with her poetry and prose - the sexy star is currently co-writing a screenplay to be produced by her Sin City co-director Frank Miller and she also has plans to pen a book of poetry. She's currently in talks with publishers.

Quote: "I don't particularly like traipsing around in fishnets (stockings) and a body suit. I prefer to be in my husband's pyjamas." Actress Jaime King.

Quote: "He's got a beautiful voice and he's a great country musician, which not a lot of people realise." Actress Jaime King still listens to ex-boyfriend Kid Rock's music.

Quote: "I work out with Jessica Alba pretty much every day. She's a good friend of mine, and we have the same trainer. Working out is so much easier when I'm with Jess. I don't want to look like a wuss in front of her, so I push myself pretty hard." Actress Jaime King loves getting fit with new mum Alba. 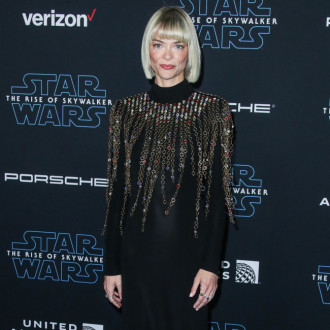