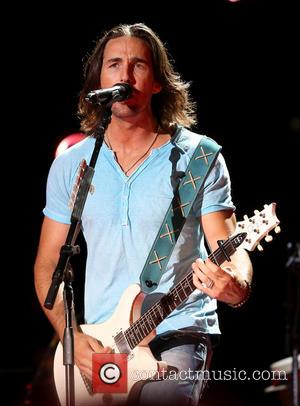 Country star Jake Owen went into shock when he saw his mangled hand following a go-karting accident earlier this month (Jul13), because he didn't immediately realise he was injured.

The Barefoot Blue Jean Night hitmaker was racing with professional drivers Kevin Harvick and Clint Bowyer on a closed course on 7 July (13) when he crashed his vehicle and had to be hospitalised.

He subsequently underwent surgery to fix his injured hand, and Owen has now opened up about the trauma.

The star tells Cmt.com, "I was coming around this corner, and I spun it and I flipped it and I rolled it. I landed, and then I was like, 'What the ... ?' I had a full racing jacket on, helmet, gloves and everything. But I just stood up, and everybody (spectators) was like, 'Whoa, whoa, whoa.' Because they saw me flip on my head and then flip back over. So I was like, 'I'm fine, I'm fine.' But then I was like, 'God, my hand hurts.' Then I looked at my hand and the glove was just disintegrated. After seeing that, I was in shock.

"I shattered my fingers - the bones inside. The doctor said it was like taking a cinderblock and dropping it on your hand. Like it spider webbed the bones inside my fingers. So he had to suture the bones back up to even make it a bone and then put a screw in there to keep it together. It kills. It hurts like crazy."

Owen reveals he felt inspired to overcome his pain and play his scheduled show in Boston, Massachusetts following the accident after witnessing the courage of the city's marathon bombing victims, many of whom lost limbs in the April (13) atrocity.

He adds, "All I could think about was, 'I'm not about to bail on Boston, a city where people just lost arms and legs and from this coward ... bomber'. I thought that if those people are Boston strong, then I'm gonna be Boston strong. It's a just a finger."