The Man Who Would Be King: James Arthur Shows Off New Tattoo 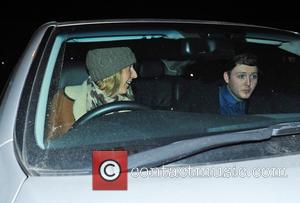 James Arthur showed off his latest tattoo while out and about in London this week. The X Factor winner, who had a number one hit with a cover of Shontelle's Impossible, revealed the tattoo while partying with The Xtra Factor host Caroline at London's exclusive Groucho Club, reports Capital FM.

James - a big fan of body art - has King Arthur tattooed on his hand. Speaking about his latest inking, the Middlesbrough singer said, "[It's] King Arthur look! Yeah, well it's more like I was a pauper and now I'm fulfilling my purpose so I feel like a king." He also has the words "love" and "hate" tattooed on his knuckles. Though James seemed to be having a whale of a time with friend Caroline, the night didn't end too successfully. The 24-year-old headed to a local shop to pick up some cigarettes before making his way home, only to find he had forgotten his keys! The singer was eventually helped out by passing police officers, who came to the rescue.

Though Arthur has made no secret of his love for the opposite sex, it seems there's only one woman for him. Tweeting on Thursday (January 24, 2012), he said, "Any time I catch a glimpse of my video for impossible i always really miss @NicoleScherzy best mentor/women I've ever met #LOVE."