Such is our internet-blessed world now, a number of you reading this now may have already heard James Blake's long awaited second album, Overgrown, or at least snippets of it anyway, before the April 8th release date. Most of you will have seen the frankly appalling cover art at least, but fortunately Blake has not changed his style to match the made-for-Mother's Day appearance as he has retained the usual boundary pushing vibes and futuristic approach to electronic music. Blake's music has always mirrored our modern times and his newest effort continues to stretch forth on the futuristic plain he began on as a fresh-faced University grad back in 2009. 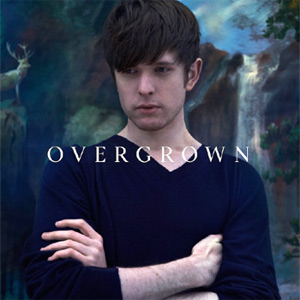 His self-titled debut was the album that no one really expected to work, not nearly as well as it did at least, so when his 2011 release not only lived up to the hype but in many ways exceeded it, the thought that the young producer might outdo himself once more has long been held as a more than likely possibility. With a pair of very exciting collaborators helping him out this time anticipation really has hit fever pitch but, even with this added help, has Blake managed to live up to the expectations laid forth for him? It wouldn't be James Blake if you could listen to Overgrown once and answer that question; no album worth its own weight can really get an immediate thumbs up, but after a number of listens it soon becomes clear that Blake still hasn't missed a beat as he continues to produce exceptional offerings one after another.

Let's start with the collaborations, then; we've all heard 'Digital Lion' by now, the Brian Eno joint effort that has been prophesised about since the turn of the decade. The 'handing of the baton' cliché will be used all too much by the time the dust has settled on Overgrown, but frankly, a collaboration between these two had always been on the cards. The eerie, slightly techno number defies categorisation and whilst it may drag at points, the song fits in nicely with the often industrial landscape that Blake is trying to produce throughout the album. His recruitment of RZA on the track 'Take A Fall For Me' may come as a surprise, but let's not forget how Blake's music has often evoked the darkest memories of hip hop, and producers and rappers alike have noted their admiration for the young producer since his emergence on the scene. So who better to hook up with James on a track than the King of minimalist, dirge production himself? Unsurprisingly, RZA manages to navigate Blake's melancholic beat well, what does surprise though is his interesting lyrical choices, with many lines sounding as though they've been taken straight from DOOM's last release, Keys to the Kuffs. "I wouldn't trade her smile for a million quid" and "fish and chips with vinegar" are not RZA's usual forte and on such a metropolitan, waiflike beat a more familiar tale of urban decay may have been expected from the Wu Tang Clan man, but these are two people who like their fans to expect the unexpected after all. As is the case with much of Blake's work, the vocals often become muffled and impossible to hear, but as always his production manages to save whilst you're left wondering "please don't marry, who?" To be honest, I could have written this whole review on Blake's connection with hip hop; his supposed work with Kanye, Drake's on-loop listening to a James Blake 12" during the recording of Take Care; and another area of the album where Blake's hip hop tendencies shine through is on 'Life Round Here.'

After a slow start to the album, with the vocal-stretching, ivory-tickling 'Overgrown' and 'I Am Sold', 'Life Round Here' could almost be described as a banger when compared to Blake's usual offerings. Taking a note from his more commercially viable dubstep contemporaries, the cyclical synths and erratic drumbeats are made for a rap hook, not that Blake's own choral vocals don't do the track justice. The Joker-esque dubstep synths evoking the genre swapping first three EPs he released may seem to signal his quest to still appeal to the cool kids in our Skrillex plagued world, but really it is Blake trying to reclaim dubstep for the underground once again (curse you capitalism!) and if the idea of Blake readdressing the genre he is so closely associated with in its current form is hard to comprehend, then you should know that by track eight, on the track 'Voyeur', he begins to think he's a bona fide house producer - particularly with the glass bottle accentuated percussion and spiralling synths (don't worry he pulls it off). At track four, with the hypnotic, pulsating 'Retrograde,' a song that has more soul than all the fried chicken in the world, it starts to become clear that Blake really knows what he's doing with himself and that he has become confident in his own ability as he takes the song from gospel R&B to an interstellar direction and back again.

Blake really is a talent to behold, as his ingenious moulding together of poles apart genres and production wizardry clearly shows - so let's not forget, the boy can sing too. On 'Overgrown' and 'I Am Sold' James croons over the yawning beat and buzzing synths in a beautifully maintained and soulful way and even when his voice serves mainly as a background hum, it is still a pitch perfect hum that not only compliments, but makes the song. Perhaps where his vocal range is best tested is on 'DLM,' which similarly presents Blake as the sullen singer/songwriter as his cover of Joni Mitchell's 'A Case of You' did on his debut. These vocal stretches often sound as though he is trying to pull off his best Jeff Buckley impression, but since when was sounding like Jeff Buckley a bad thing? Like with Kevin Parker of Tame Impala, his chameleonic singing is not something to be scoffed at, but to behold. Like these and on the gut-wrenchingly open 'To the Last' Blake must surely acknowledge himself as a vocalist as well as a producer by now and he is clearly unafraid to demonstrate his vocal dexterity.

James Blake is an artist still trying to find his niche, but when you're already as accomplished at all manner of musical exercises as he is then it will obviously be hard to focus all this talent and all this energy into one place. Overgrown sees Blake attempting to focus all his energies in one place and whilst at times some songs meander and some sound a little erratic, it never feels as though Blake got lost or misguided whilst making it. The songs drift together as an album seamlessly, yet each track is readily identifiable and is its own work of magnificence. Ignore the nightmarish artwork for here is an album that not only challenges you, but rewards you too, an album that can maybe just begin to reinstate your faith in music again.