Madame Tussauds has unveiled wax figures of all six actors who have played James Bond at a new exhibition in London. 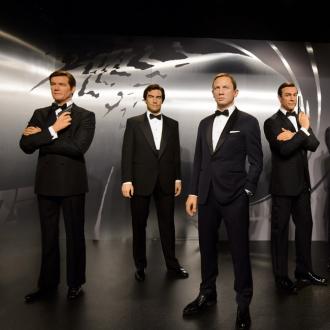 Madame Tussauds has unveiled wax figures of all six actors who have played James Bond.

Brand new waxworks of Sean Connery, GEORGE LAZENBY, Roger Moore, Timothy Dalton and Pierce Brosnan have joined the likeness of Daniel Craig at Madame Tussauds in London, where they will be displayed for six weeks.

Each of these wax figures are clad in a classic 007 dinner suit, designed by Oscar winning costume designer, Lindy Hemming, based on the original costumes.

Lazenby, Moore and Connery have each been posed in different variations of a classic Bond pose - arms folded and pistol held aloft, whilst Craig, Brosnan and Dalton are shown in more relaxed style.

They have been placed in front of an iconic gun barrel backdrop, synonymous with the James Bond films.

The Madame Tussauds team already had access to measurements of Craig, Connery, Moore, Dalton and Brosnan from previous figures featured at the attraction, but this is the first time Lazenby has had his own waxwork.

The star of 'On Her Majesty's Secret Service' gave the artists a sitting in Los Angeles in February.

The figures took a team of twenty artists, four months to complete at a cost of £150,000 each. Hundreds of layers of oil paint were used to build up accurate skin tones and each hair on all of the figures' heads was inserted individually by hand over a six week period.

General Manager of Madame Tussauds London, Edward Fuller, said: ''We are delighted to be revealing this exciting line-up first in London and what better timing than the week before the 24th installment of this incredible film franchise gets its world premiere here. ''Fans have always loved getting up close to Madame Tussauds' Bond figures but now they can meet ALL six at the same time! What an incredible opportunity! We know they are going to love measuring up to their personal favourite 007, whether it's the Bond they grew up with, the first they saw in the cinema or the current incarnation they'll see in 'SPECTRE'.''

The figures will embark on a tour of Madame Tussauds locations worldwide on December 1.