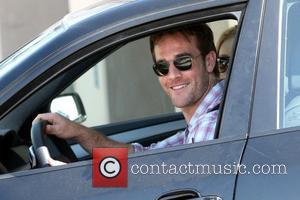 Actor James Van Der Beek has wed his model girlfriend in a secret ceremony, just a year after they first met.
The former Dawson's Creek star, 33, exchanged vows with Kimberly Brook, who is pregnant with the couple's first child, on Sunday (01Aug10).
In a series of posts on his Twitter.com page, he writes, "Best day of my life so far... The woman I love did me the honour of became (sic) my wife today... I look forward to earning her for the rest of my life."
The newlyweds are expecting their baby in the autumn (10).
Van Der Beek was previously husband to actress Heather Ann MCComb. He started dating Brook last summer (09) after his marriage broke down.
The actor's nuptials round out a weekend of celebrity weddings - rap superstar T.I. married Tameka 'Tiny' Cottle in Miami, Florida on Friday (30Jul10), while Alicia Keys tied the knot with producer Swizz Beatz in Corsica, France on Saturday (31Jul10). DJ Jazzy Jeff also exchanged vows with his girlfriend on Saturday.