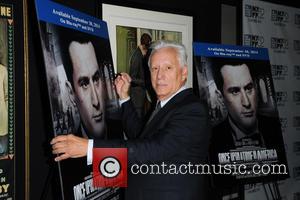 The former Law & Order star, who also represented Tennessee in the U.S. senate until 2003, passed away at the age of 73 in Nashville after a battle with cancer, and his actor friends and co-stars have taken to social media to mourn him.

Woods writes on Twitter.com, "A true gentleman. I was fortunate enough to have dined with him at our mutual friend's dinner parties. A lovely man", while The Miracle Worker actress Duke adds, "RIP Fred, it will always be an honor to have known you! Love and prayers to your family."

Country music star MCGraw adds, "Our family was saddened to hear of the passing of Senator Fred Thompson. He was a good man and our prayers are with his family," while Thompson's Law & Order co-star Elisabeth Rohm posts, "It is with a heavy heart that I say goodbye to Fred Thompson. Devastated to hear this sad news & Sending love and prayers to his family #RIP."