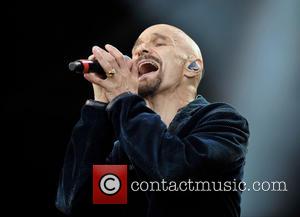 James star Tim Booth has a pioneering British dentist to thank for his good health after the tooth doctor ended an agonising two-and-a-half year neck injury with a four-hour jaw operation.

Booth seriously injured his neck while onstage at a gig in the U.S. in the late 1990s and underwent emergency surgery. He was forced to wear a brace as top doctors attempted to figure out what he had done and how it could be fixed.

The singer feared he'd have to curb his energetic stage act forever as menial tasks became difficult for him.

He tells Wenn, "For two-and-a-half years I was disabled; I wore a neck brace onstage and I couldn't carry a shopping bag. I I tried every specialist there was and nobody could fix it."

But his problems were solved by a clever dentist.

Booth adds, "He gave me a brace for my jaw, which changed the relationship between my spine and my jaw. Literally, within four hours, I could do everything again. Remarkable work.

"The procedure was almost outlawed in the U.K. There were five of these guys and four of them lost their insurance because they (dentistry governing body officials) don't want there to be seen to be a connection between the jaw and the spine - because then the whole orthodontist profession gets called into question.

"It was the craziest thing. Now I can do anything again. I'm back to jumping into the audiences again and dancing like a lunatic. I'm told that I broke a stagediving record at a show in Athens because I went into the audience for four or five minutes and kept singing.

"People can't believe it. They're like, 'A dentist fixed your spine? You're nuts'."

James - The Night Before