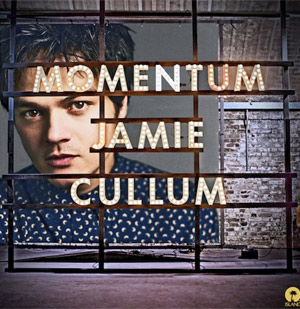 Since the fantastic response to his special release last month ('Love for $ale' feat Roots Manuva), Jamie Cullum is pleased to announce the full details of his sixth studio album, 'Momentum', released on 20th May 2013 via his new record label Island Records.

Having sold over ten million records worldwide, performing to sold out tours across the globe, working on a variety of unique projects that have seen him collaborate with a range of artists from Stevie Wonder, Pharrell, Sander Kleinenberg, Rizzle Kicks to The Roots, Jamie continues to enjoy an incredible creative roll.

The album, titled 'Momentum' for good reason, is bursting with ideas and inspirations which almost have a life of their own. Indeed, Jamie approached this record in a completely different way to his previous LPs, for the first time using DIY home demos as a blueprint for the majority of its tracks. and for a while, using everything from iPhone apps, charity shop keyboards and cassette recorders as his 'go-to' instruments during the process.

'Momentum' has one overarching theme:
"The album is about that crossover period from youth into adulthood where you still have one foot in each" explains Jamie. "You start to understand the world in such a different way and see things more as they are - both ugly and beautiful. You're caught between that fresh sense of the wider picture whilst still battling those same old issues within your own head. Take Me Out (Of Myself) through to Everything I Didn't Do to Get A Hold of Yourself. Have I done enough? Have I achieved all that I thought I would? What about everything I didn't do?"

The album was produced in part by Jim Abbiss (Artic Monkeys, Adele) and Dan The Automator (Kasabian, DJ Shadow) and it should come as no surprise that, combined with Jamie's talent for writing a tune, the album is brimful of powerful songs; from the opening declaration of intent 'The Same Things' to the beating heart of the album 'Sad, Sad World', which began life on a train journey into London, ending with 'You're Not The Only One', a song written in response to being a judge on Sky One's reality show 'Must Be The Music' alongside Dizzee Rascal. The first single off 'Momentum' will be the ever uplifting Everything You Didn't Do, released on Sunday 12th May.

Additionally the deluxe album includes three bonus tracks plus live recordings taken from Jamie's recent performance at the world famous Abbey Road Studios in London. These include the remarkable collaboration between himself and BRITs Critics Choice Nominee Laura Mvula on 'Sad, Sad World'.