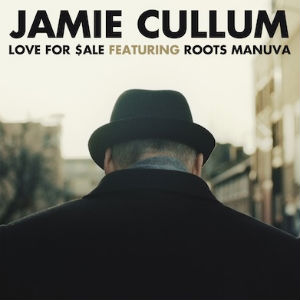 Jamie Cullum has today announced a special release, his first musical output in three years, coinciding with an announcement that he has signed to Island Records.

'Roots Manuva is an institution. He's incredibly musical and between making his own amazing albums he has collaborated with so many varied and brilliant artists. After I ripped off his bassline, I had the audacity to ask him if he wanted to write a verse for the track. Luckily he was up for it. He has a sense of timing and drama that works so well with a live band in this situation, a commanding voice and a presence that could fit alongside Cole Porter. How many people can do that?'

Alongside the track, after seeing the recent work they had done for Rankin and Kanye West, Jamie commissioned the young and enigmatic directors Charlie & Joe to create a short film to accompany the song. The short features Larry Lamb of EastEnders and Gavin & Stacey fame as a heart salesman.

'It's so fun for me to be part of something a lot more cinematic for the Love for $ale video' says Jamie 'it's not something I've had the chance to do yet in all these years making videos. I'm very proud for it to represent this song which in itself is a huge clash of different influences.'

With over 10 million record sales under his belt Jamie joins an incredible roster from past and present over at Island Records including Mumford & Sons, Bob Marley, Amy Winehouse, Robbie Williams, Florence And The Machine and Jessie J.

'Jamie Cullum is without doubt one of the most talented musicians and enduring artists this country has produced in years.  At our first meeting it quickly became clear how excited and genuinely delighted Jamie was to be signing to Island Records. He also happens to be one of the most genuine and charming people in the business.' (Darcus Beese - Island Records President)

Since the release of his last album, as well as performing to millions of people around the globe on his critically acclaimed sold out tours, Jamie has been working on a variety of unique projects that have seen him collaborate with artists including Stevie Wonder, Rizzle Kicks, ?uestlove and The Roots, write the Golden Globe nominated song 'Gran Torino' for the Clint Eastwood film of the same name and perform at events such as the FIFA Ballon d'Or in Zurich in front of Cristiano Ronaldo and Lionel Messi and for Robert De Niro at his party at the recent Cannes Film Festival.

More information on Jamie's fifth studio album will be announced in the coming weeks.

Listen to 'Love For $ale' here: