The new incarnation of Electro looks creepy, but also very cool - and not just because of his blue complexion. 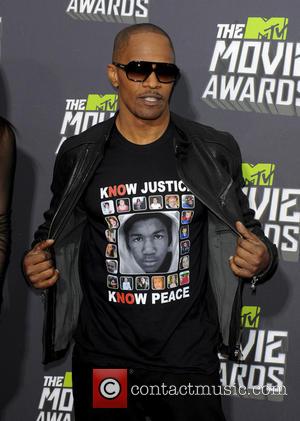 Everyone got a glimpse of Jamie Foxx as Electro in The Amazing Spider-Man 2 in some newly released pictures from the set of the movie.

In the stills, Foxx is seen wearing creepy blue makeup and a grey hood. This means that the movie will significantly deviate from the original version of the villain, which was portrayed wearing a bright green suit with a yellow lightning mask. According to the LA Times, this portrayal of Electro will more closely resemble his Ultimate incarnation, which also has a different backstory – being the result of genetic experimentation, instead of a power line accident. It isn’t clear yet how much of the back story the producers plan to keep, but Foxx did give the reasons behind the choice of costume in an interview with Blackfilm back in December: “They want to have it more grounded and not as comic book-y, so it won’t be green and yellow,” he said. “They want to try new things, like a liquid rubber and things like that, and there are all these bolts and stuff in my arms when they are hanging me upside down and trying to figure out what happen [sic]. How did he become this way? So, it will be some new stuff.”

Sounds pretty cool to us. The sequel to the 2012 film is due in May of next year and, as previously announced, Andrew Garfield and Emma Stone will be reprising their roles. Additionally, Shailene Woodley will join the cast as Mary Jane Watson, Chris Cooper and Dane DeHaan as Norman Osborn and his son Harry, Paul Giamatti reportedly as villain the Rhino, and Colm Feore and Felicity Jones in roles yet to be announced. Foxx attended the MTV Movie Awards this Sunday, sporting a shirt, honoring the victims of gun violence in the US.