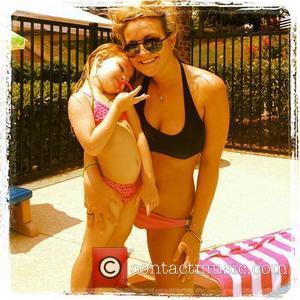 Picture: Jamie Lynn Spears tweets this pic with the caption, '#littlegirls #littlemoments ' 29.05.12 Supplied by WENN does not claim any ownership including but...

Jamie Watson meet Jamie Watson! That’s how it looks like things are turning out after Britney Spear’s little sister Jamie Lynn Spears revealed on Twitter that she and her boyfriend Jamie Watson are to get engaged.

If you hadn’t worked that out yet, then it means that if Spears decides to take her fiancée’s name she’ll then have exactly the same name as him! Pretty amusing, though it possibly might not happen given the obvious star value that having the Spears surname brings with it. But enough of that cynicism, let’s rejoice in Spears great news. “Guesssss what??????” the 21 year-old wrote in her first tweet, before posting a picture of the whacking great diamond ring that Watson had bought for her, adding the simple caption “: ) #hedidgood.” Her elder sister wasn’t too far behind in bringing up the public congratulations, with Britney writing “So excited and happy for my sister, congrats @jamielynnspears - love you.” Aww, good stuff. As the Mirror pointed out, this is Spears second relationship after her controversial time with Casey Aldridge, who she has a four year daughter with. Spears and 30 year-old Watson got together three years ago not long after the split. It’ll be cheering to the Spears family to have some wedding news to look forward to again, after Britney broke off her own engagement to her agent Jason Trawick two months ago.