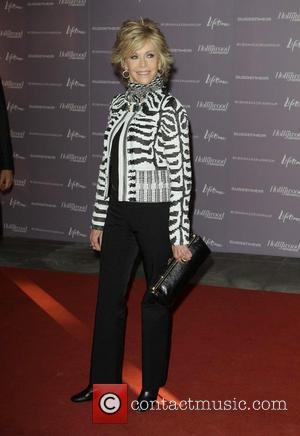 Jane Fonda believes Michael Jackson would have struggled with old age as he was so terrified of death.
The actress became friends with the King of Pop during the 1980s, and Jackson stayed with Fonda at her ranch in California while she was filming On Golden Pond.
Fonda reveals the superstar, who died in 2009 at the age of 50, had a "meltdown" when she pointed out the place she wanted to be buried, and she believes his fear of death was so strong, he would have lived a tortured existence if he had reached old age.
She tells CNN's Piers Morgan, "I remember he was visiting me once, I had a ranch in California, Santa Barbara, and I was walking him around, it was how he was introduced to that area, where he eventually bought Never Never Land (Jackson's Neverland Ranch)...
"I was walking around and showing him around and I pointed to the edge of a cliff and said that was were I was going to be buried and I thought that he was going to have a meltdown. The notion that I could countenance the fact that I was going to die was an anathema to him - he screamed. And he talked (about) how he would get into an oxygen tank and he thought that was going to keep him alive forever. I think growing old would have been very, very, very difficult for Michael, there were a lot of demons chasing that kid. It would have been hard for him, I wish it could have happened another way but it's hard to imagine for someone as tormented as he was could have lived a long, and peaceful and natural life."