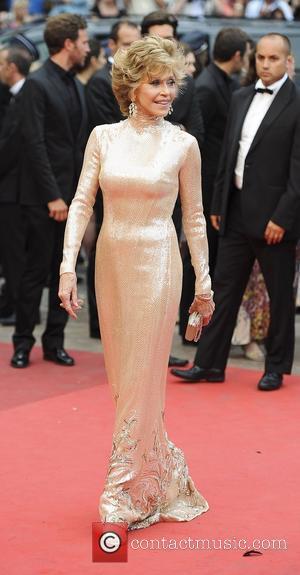 Jane Fonda, the 73-year-old movie star and fitness guru, has spoken candidly about her battles with bulimia and low self-esteem. Fonda, often noted for her slim figure and healthy image, says she still worries about her appearance and has been forced to tone down her fitness regime in recent years.
Speaking to the US edition of Harper's Bazaar, the 'Barbarella' star revealed her secrets to still looking good despite her age, saying, "I don't do lunges because I have a fake knee and a fake hip. My arms are thin, but I'm vain about loose flesh. And I'm so careful that what I wear will show off my best parts, which are my waist and my butt". The actress claims to have been disappointed with her own body image between "puberty to 50" and suffered from bulimia which got worse the older she became. Jane suggests her father, the actor Henry Fonda, contributed to her paranoia, saying, "He was a good man, and I was mad for him, but he sent messages to me that fathers should not send: Unless you look perfect, you're not going to be loved".
The actress was scheduled to promote her new self-help memoir 'Prime Time' on shopping channel Qvc last month, but the network cancelled her appearances at the last minute. Fonda claimed they had buckled under pressure from right-wing groups still unhappy with her outspoken opposite to the Vietnam War.