Jane Lynch And Glee Win Big At The Golden Globes 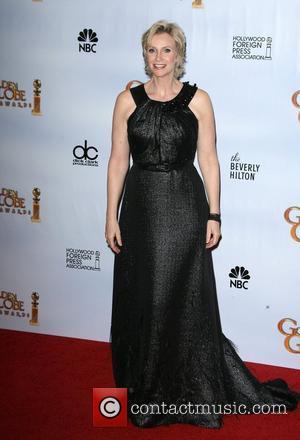 Jane Lynch, the American comedian and actress picked up the award for 'Best Performance by an Actress in a Supporting Role' at last night's GOLDEN GLOBES for her portrayal of 'Sue Sylvester' on the hit musical-comedy Glee. Lynch's award completed a hat-trick of wins for the hit show, with Chris Colfer taking home the title of 'Best Performance by an Actor in a Supporting Role' and much of the cast were on-hand to accept the award for 'Best Television Series-Musical or Comedy'.
Lynch picked up a 2010 EMMY AWARD for her role as Sylvester, a decision that not everyone in Hollywood agreed with. Actor ED O'NEILL sparked controversy for claiming that the actress didn't deserve her honour. The New York Daily News reported back in December that O'Neill had said, "I love Jane, honestly I do.but I don't think she should have gotten the Emmy for that part". He added that his 'Modern Family' co-star Sofia Vergara was more deserving of the award, saying, "I don't think people realize how hilarious she is. She's so sharp with her wit, it's amazing".
During his acceptance speech, 20-year-old Colfer dedicating his award win to the victims of bullying and later tweeted, "I can't believe it. I'm not sure how much my shaky hands can tweet, but thank you so much! Couldn't do what I do without you guys!" It could have been an ever better evening for GLEE had Lea Michele and Matthew Morrison not been overlooked in the 'Lead Actor' and 'Lead Actress' categories.