Janelle Monae Performs For The President At Political Fundraiser 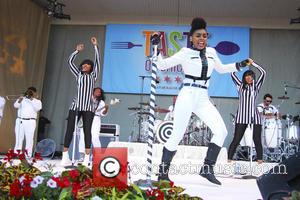 Picture: Janelle Monae - Janelle Monáe headlines day 2 of the Taste of Chicago 2014 at the Petrillo Music Shell at Chicago's Grant Park on Thursday,...

The event took place at the home of Scandal creator Shonda Rhimes, and was co-hosted by the show's star Kerry Washington.

Obama addressed the crowd, and singled out Monae for particular praise, saying of the Tightrope hitmaker, "She's played so often at the White House, there should be a room named for her."

According to reports, the politician revealed Monae is in possession of a video showing him dancing with pop star Usher, adding, "She can blackmail me at any time. I did not drop and split, but I did bust a move."

Proceeds from the gathering will go to the Democratic National Committee.