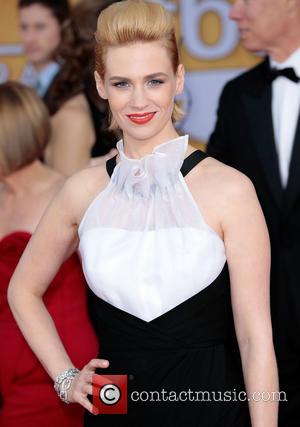 Actress January Jones says her hair is falling out at an alarming rate. The 35-year-old actress, best known for playing Don Draper's wife Betty Draper on Mad Men, told Grazia Daily at the Sundance Film Festival in Utah that continuously changing the color of her hair is taking its toll on her scalp.

Jones - who has changed from a blonde, to brunette to a redhead - said, "I have been every color and now my hair is falling out in clumps. I like it all colors, it makes you feel different according to what color it is, but I prefer to be blonde. My son recognizes me in photos when I am blonde. He says, 'Mama'. I've been blonde, red with extensions for this film, then blonde, then black, and now blonde again. I'm going to have to shave it off and wear a wig." Hair stylists believe excessive coloring can result in hair loss, with Gretta Monahan, founder and CEO of Grettacole Salon in Boston telling ABC News, "The chemicals that are used and the over-frequency in coloring your hair can result in breakage and hair loss."

January Jones is not the only star to struggle with hair loss issues. International pop star Lady Gaga and TV personality Kelly Osbourne have also reportedly suffered hair loss because of hair dye. "I felt like I'd been electrocuted and burst into tears," the latter told the UK's Guardian newspaper after admitting to getting bald patches.