If you're not already on board with Japandroids raucous brand on noise rock, you really should be. The duo's third album proper, Near To The Wild Heart Of Life, flexes so many more musical muscles than its almost perfect predecessor Celebration Rock. It's difficult to think of how the Canadian band could have crafted a better follow-up to that record. Taken together both albums are like a one-two punch of high intensity joyous noise. However you can certainly hear this time around that Brian King and David Prowse have refined their sound by making small improvements.

It's perhaps a happy accident, but the opening lyrics of lead single and title-track 'Near To The Wild Heart Of Life' seem scarily prescient in a world unsettled by the inauguration of Donald Trump. "The future's under fire" seems prophetic and strangely evocative of the President's Apprentice catchphrase, but thankfully Japandroids aren't aiming their sights on a grand political statement. Instead the track that races out of the gate with a drum roll and wall of guitar noise concentrates on leaving home, with all the anticipation and promise it entails. It's like a slice of classic Springsteen on speed, "I used to be good, but now I'm bad" King exclaims, there's a dark undercurrent to the exuberance that comes to the fore later in the record.

Musically and lyrically Near To The Wild Heart Of Life is a big step forward. The vocals aren't buried as far down in the mix as before, allowing more nuance to their delivery, even if many of the lines seem like feel-good choruses on first inspection. There's also a wry sense of humour and affection in lines like "Canada always answers when I call her name" ('North East South West'). Alongside a through-line narrative that encompasses life on the road and matters of the heart, both religious and romantic, there are also additional backing vocalists and synths introduced to the usual guitar and drums Japandroids formula. The first hint that the King and Prowse are mixing things up comes with the acoustic guitar and synths that herald the arrival of 'True Love And Free Life Of Free Will'. As the acoustic guitar persists over the noise that builds you realise that King and Prowse aren't trying to use sheer force to get their point across anymore, they've broadened their horizons as they explore a world of "cigarettes, sorcery, and biblical sins".

Continue reading: Japandroids - Near To The Wild Heart Of Life Album Review

By Andy Peterson in Music Reviews on 27 January 2017

There has been fewer more prescient titles when predicting the future that Japandroids Post Nothing, the words they used to name their 2009 debut and which now reflect the mess we're in eight years later, except in reverse. Surely it's not hard to see after all that instead of being post nothing, we're now post everything; news, art, friendship, invention, music. Rather it seems - to be more blunt - that we don't have the world at our neatly manicured feet as we might've expected way back then, instead we have no idea what we're inheriting, other than confusion, strife and cynicism.

Strange then, if cynicism is the new sincerity, that a band as consciously stylised as Canadian duo Brian King and Dave Prowse have rendered Japandroids would end their nearly four years of silence with a new record that so devoutly embraces radically traditional values, in the process making Near To The Wild Heart of Life a bold tilt at fresh converts.

Not all of the delay has been due to a contrived throttling of their product for needy audiences: King now splits his time between Toronto and Mexico City whilst his partner has remained in their native Vancouver. Like all of their processes seem to be, recording is also a deliberate one, although the ferocious drum fills that stripe the titular opener's introduction speak to both a familiar intensity and also newly found abandonment. It's a vibrant call to arms, full of elemental words like fire, love and hell, the sort of blue collar semantics which Trans-continental gauche has used since a tousle haired Bruce Springsteen first emerged.

Continue reading: Andy Peterson reviews Japandroids' Near To The Wild Heart Of Life 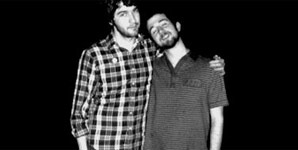