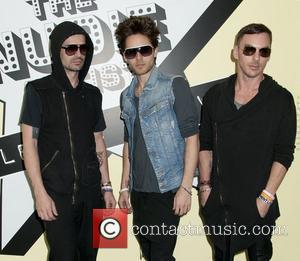 Picture: Tomo Milicevic, Jared Leto and Shannon Leto of 30 Seconds to Mars attend the screening of the music video for their song 'Hurricane' at the...

Jared Leto and Blink-182's Tom Delonge are among the rockers who have paid tribute to tragic Jackass star Ryan Dunn.
The TV prankster died in a high-speed car crash in Pennsylvania last week (20Jun11), plunging the showbiz world into mourning.
30 Seconds to Mars frontman Leto has honoured Dunn's memory by offering condolences to his loved ones and describing his passing as "an undefinable loss".
He tells Kerrang! magazine, "I always felt Ryan was part of the extended family. My experience with Ryan was that he was warm-hearted, fun, friendly and funny. He was a person everyone enjoyed being around, unpretentious, unaffected, real and true, and one loved by so, so many. An undefinable loss. The whole of the Mars family... send thoughts and support to his family and friends."
Andrew W.K., who shot a music video for his track We Want Fun with the Jackass cast, adds, "Ryan worked hard at living an awesome life... He lived the ultimate life and brought joy, delight and a sense of possibility to all sorts of people."
Blink-182 guitarist DeLonge insists Dunn's death should serve as a reminder to fans to live life to the fullest.
He says, "(Dunn) was a spitting image of anyone of many in my group of friends. Every skateboarder I knew had his same sense of humour and rebellion. Life is unpredictable and short. Make sure your life is worth watching as you watch it go by. R.I.P. Ryan."