Actor/singer Jared Leto Found It "Painful" To Get Into The Dark Psychological Mindset Of Comic Book Villain The Joker For Suicide Squad. 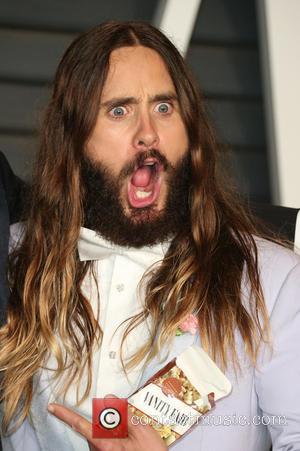 The Dallas Buyers Club star went to extreme measures to play the comic book psychopath and did not break character during down time during filming on the upcoming supervillain movie.

He even sent creepy gifts to his co-stars including a live rat to Margot Robbie and bullets to Will Smith, and he also would call Jim Parrack, who plays his henchman Jonny Frost, and give him orders to spray paint roses black and to fill a backpack with nails.

Jared has now spoken about getting into the dark character, telling Britain's Empire magazine it was both fun to prank his co-stars and painful to become that dark.

"There was definitely a period of... detachment. I took a pretty deep dive," Jared tells Britain's Empire magazine. "But this was a unique opportunity and I couldn't imagine doing it another way. It was fun, playing those psychological games. But at the same time it was very painful, like giving birth out of my p**ck hole."

His co-star Will previously revealed he had never met the real Jared as the actor portrayed The Joker the whole time.

"We worked together for six months and we've never exchanged a word outside of 'Action' and 'Cut', Smith tells Beats Radio 1. "We've never said, 'Hello'. (I'm) looking forward to meeting him. I've only ever spoken to him as (my character) Deadshot, and him as The Joker. I literally have not met him yet. So, the first time I see him will be, 'Hey, Jared, what's up? How you doing? Nice to meet you'. He was all in on The Joker."

Late actor Heath Ledger portrayed The Joker on the big screen in The Dark Knight in 2008 and he also went to extremes to get into character.

The film, his last completed role, was released after his death in January, 2008 from an accidental overdose of prescription medication. He was 28.