While receiving his Oscar for Best Supporting Actor, Jared Leto sent a message of support to Venezuela and Ukraine: "As you struggle to make your dreams happen, to live the impossible, we're thinking of you tonight." 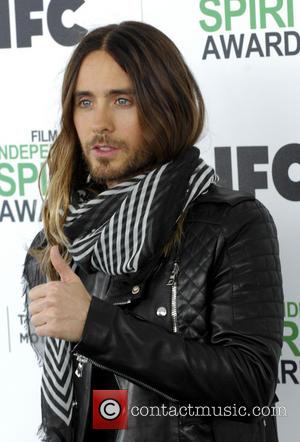 Jared Leto is fresh off receiving the very first award at this year's Academy-Award's as he was prized with Best Supporting Actor.

The 42 year-old won the award for his role as a transgender person dying of AIDS in 'The Dallas Buyers Club,' where he starred alongside Matthew McConaughey, who won Best Actor, and Jennifer Garner.

When receiving the award, Leto took the opportunity to discuss a global issues, and sent out a message to of support to Ukraine and Venezuela.

"To all the dreamers out there ... in places like Ukraine and Venezuela, I want to say, we are here. And as you struggle to make your dreams happen, to live the impossible, we're thinking of you tonight," he said during his acceptance speech.

It wasn't long before reporters were probing Leto about his speech, so he explained the importance of bringing attention to the turbulent situation in both countries while on such a vast platform.

"You have an opportunity when you stand on the stage - you can make it about yourself or you can hold up a mirror and shine a light. And that's what I chose to do tonight," Leto said backstage, according to the Associated Press.

"I feel at home all over the world, and for me these global issues impact us in a really direct way," he coninued. "I felt on behalf of the people I interact with on Instagram and Twitter and Facebook, and my own interests as a person in a global band, it was important to address those things."

The 30 Seconds To Mars frontman also commented on how much of an honor it was to be recognised by his peers, and how surreal the experience feels.

"I never ever in a million years dreamed that I would be here right now, talking to you. It wasn't even a fantasy of mine because it was so far-fetched," he stated. "I would have never thought that they would give me any prize - I never won an award for anything I did on screen until I did 'Dallas Buyers Club."