Jared Leto admitted to not yet watching 'Dallas Buyers Club' due to playing "such an intense role." 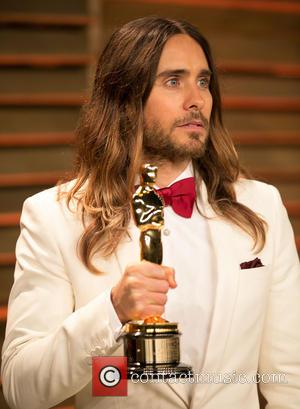 Jared Leto may have won an Oscar for his role in ‘Dallas Buyers Club’, but he still hasn’t even seen the film.

The 43 year-old actor/singer was prized with Best Supporting Actor at Sunday’s award ceremony for his portrayal of Rayon, an HIV-positive transgender woman.

Not only hasn’t Leto watched the film as of yet, but he plans on not seeing it anytime in the distant future.

The ‘Thirty Seconds To Mars’ frontman made the revelation while appearing on ‘The Ellen DeGeneres Show’ this Monday (March 3rd).

While praising Leto for his role, Ellen says to the audience, “if you have not seen it, you must see it,” when referring to ‘Dallas Buyers Club’.

But surprisingly Leto tells Ellen, “I have not seen the film yet,” and when the host asked for the reason, he just said “I’m going to trust you.”

“I think one day I will watch it, because, you know, I’ll be curious at some point,” Jared continued. “But it was such an intense role. It’s better for me to just leave it alone right now.”

Although the last 24 hours must have been full of celebrations and adulation for Jared, he may have already found out one downside to now being an Oscar-winning actor.

As he emerge from his home on Monday morning, an army of photographers were waiting for him.

“There were paparazzi waiting outside of my house this morning,” Jared said. “I don’t know if [they were there] just to kind of celebrate the day with me or find out who else I was sleeping with, but I got in at — I think the crack a** of dawn last night, maybe 6 o’clock — 5:30.”

Jared referred to who he was sleeping with due to an earlier joke made by Ellen, when she asked Leto if he had slept with his Academy-Award yet.

Watch Jared Leto's appearance on 'The Ellen DeGeneres Show' below