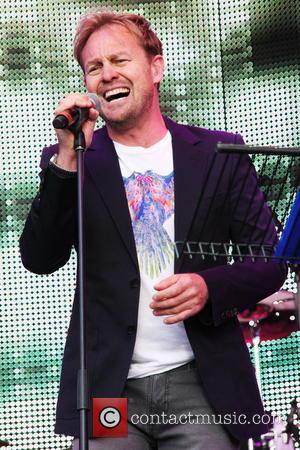 Actor Jason Donovan has hinted he will reunite with his former Neighbours co-star Kylie Minogue for a special scene marking the hit Australian drama's 30th birthday next year (15) if their pal Guy Pearce joins in.

Donovan, Pearce, and pop star Minogue found fame on the long-running soap opera in the 1980s before leaving to pursue highly successful stage and screen careers.

Neighbours turns 30 next year and producers have a few surprises in store for viewers, prompting fans to speculate that Minogue is planning a comeback cameo after she posted a message on Twitter.com referring to buying a pair of overalls, as worn by her mechanic character in the show.

However Donovan, who played her onscreen boyfriend in the drama, has grave doubts about returning for a cast reunion but admits he would consider it if his two old pals sign up.

He tells U.K. Tv show Loose Women, "The thing about something like that I feel is it's got to be a great effort - you can't just (have) one or two (stars returning). Possibly if Kylie and Guy (returned)... The problem is the publicity would sort of overshadow any contribution we would make. I don't know at this stage..."

Jason Donovan keeps out of kitchen at Christmas

Donovan: 'Kids Saved Me From Drugs'