It's 1962 and the world is on the brink of starting a new world war. As far as the general public are aware, mutants do not exist. Two of those very mutants still discovering their abilities are Charles Xavier and Erik Lensherr (Professor X and Magneto), two equally intelligent men who share a secret; they both hold incredible powers.

By Matt McKillop
Excellent
Plutonium 239 (or Pu-239) is one of the fissile isotopes used to make nuclear weapons; it's also the title of a thoughtful and frightening new movie from writer-director Scott Z. Burns.

By Keith Breese
OK
If there's one thing you learn from movies, it's that you should never -- under any circumstances -- expect that working for the Man (DEA, CIA, FBI, any of them really) is going to be easy. Especially if they ask you to impersonate the legendary Bobby Z, drug dealer and beloved surfer (yes, you read that right), in a hostage exchange with a Mexican drug kingpin. You can pretty much guarantee that things are going to sour. And fast. Yes, there will be blood, bullets and if you're lucky, some T&A.

By Bradley Null
Good
Lock, Stock & Two Smoking Barrels has been described as the British Pulp Fiction, and on the surface, that would seem like an accurate depiction. It's got the usual cross-section of characters with witty tongues involved in varied illegal activities, that get themselves into very peculiar situations in which no one really survives unscathed. Nonetheless, the film seems to be missing something that characterized its predecessor. And right now, you're getting the feeling that I'm about to quickly file Lock, Stock as another Tarantino homage/copy-cat crime, but that's not quite it either.

Lock, Stockis in fact, probably the best film since Pulp Fiction in which there are no really good guys. Pulp Fiction, Lock, Stockbegins with what would seem to be a simple story, that quickly careens out of control. In this case, four buddies; Tom, Eddie, Bacon, and Soap, pool their money together to back can't lose Eddie at an unbeknownst-to-them rigged game of cards. Of course they get fleeced, and end up in heavy debt to the local heavy. What follows is a madcap plan to recoup the money by intercepting a heist Eddie has fortuitously discovered his neighbor is carrying out. The interrelation of the problems with the original heist, along with the interception of it by Eddie's gang, and a couple of other local illegal activities result in a frantic circle of destruction.

By Norm Schrager
Good
In his short career, Mark Wahlberg has been most effective when playing characters full of naïve sincerity. In Boogie Nights, The Yards, and even Three Kings, his talent is in making the audience believe he's a good guy with a lot of heart, just trying his best. That honest hopefulness works well for him in Rock Star, a generally entertaining tale of an 80s heavy metal superfan who suddenly becomes his favorite band's lead singer. The problem with the film lies in director Stephen Herek's inability to take advantage of the strengths that Wahlberg displays. The story is loosely based on metal icons Judas Priest, who, in 1997, replaced singer Rob Halford with an actual fan (so tell me, how would one actually know if Judas Priest replaced a band member?) Wahlberg, as Steel Dragon fan Chris Cole, is just brimming with dedication -- he works hard as a copy machine repairman, busts his ass in his Steel Dragon cover band, tells his parents he loves them, and has a long relationship with his girlfriend/best friend/manager (Jennifer Aniston, still underrated by Hollywood). After being booted from his band for taking things too seriously, Chris gets a call from the real Steel Dragon, who are interested in his pipes. Just like that, he's the new guy out front. 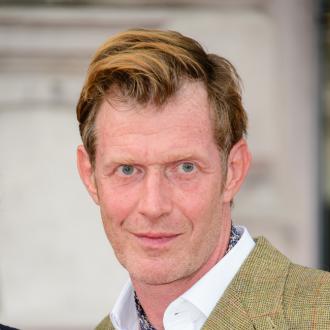 Jason Flemyng: I, Robot is rubbish