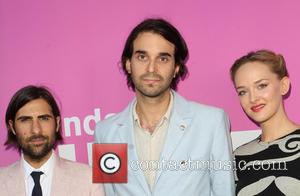 Actor Jason Schwartzman once posed as Red Hot Chili Peppers frontman Anthony Kiedis after a fan mistook him for the rocker.

The Saving Mr. Banks star was out jogging a few years ago, when a fan approached him and asked him to sign some of his possessions, but the items turned out to be Red Hot Chili Peppers memorabilia.

"So basically he said, 'Would you mind signing some stuff?' and I said, 'No, not a problem...,' and he handed me all this Red Hot Chili Peppers stuff... and it had everybody's signature in the band (on it)... He's like, 'I got Flea, I got Chad (Smith), I just don't got you Anthony'.

"I was so deep in this conversation with this man, it would be embarrassing to the both of us if I said, 'I'm not Anthony Kiedis'. So to make him feel Ok, I became Anthony Kiedis..."