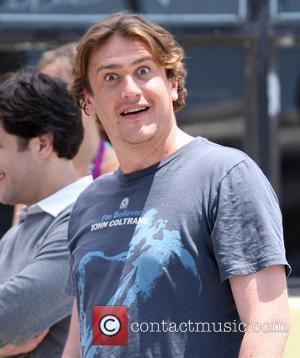 HOW I MET YOUR MOTHER star Jason Segel fears he has ruined his dating life after revealing all in his new movie FORGETTING SARAH MARSHALL. The single Knocked Up star shows off his genitals in the film and now fears any future girlfriend will use the movie for research before agreeing to romance him. He says, "I thought it would be fun. I thought I'd walk out naked and they'd yell, 'Action,' but no, it's not like that at all. You show up and realise you're about to be naked in front of 300 people. "I also had a realisation right before I walked out that did not help... there aren't too many women out there who just love a small penis. That's all I kept thinking. "The (censors) MPAA made a specific rule that as long as it's flaccid, it's still an 'R' rating, but you don't want to be too flaccid! "At one point there were seven penis shots and now we've got it down to four. There was one shot that really disturbed me. One of the shots they framed was just half my penis and it looked really, really weird. People fainted and cried. "I'm interested to see how it affects my life. It's weird when my family sees it. I saw it with my mother at the first test screening which was horribly embarrassing. "I don't know how it's gonna affect my dating life. It'll be like, 'You've already seen me naked!'"