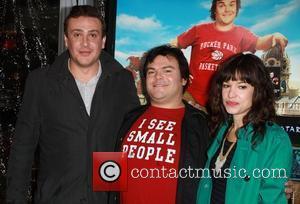 Comedian Jason Segel was so thrilled to meet Kermit the Frog during a script read through for his upcoming MUPPETS movie, he wept tears of joy.
The funnyman is bringing the family-friendly franchise created by Jim Henson back to life in the 2011 project, the first since 1999's Muppets From Space.
But he admits he couldn't control his excitement when he met Kermit and had to halt the reading to compose himself.
He says, "I've been writing this for three years now, and when we did our first table reading they brought the actual puppets, and they brought out Kermit and they had to stop because I started crying hysterically. It was so beautiful! All he said was, 'Hi ho!' I just turned around and he goes, 'Hi ho!' and I looked at him and was like, 'We gotta stop!' I was freaking out."
Jack Black, Amy Adams, Zach Galifianakis, Emily Blunt and Ricky Gervais will all make appearances in the film, which is due for release next November (11).