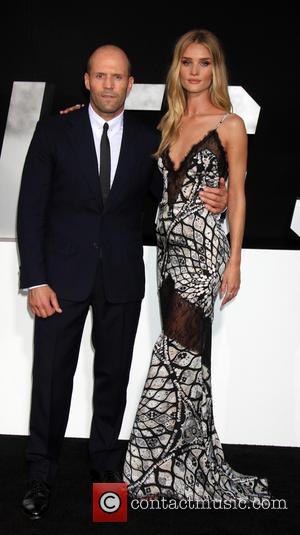 Picture: Jason Statham and Rosie Huntington-Whiteley - Stars attended the Premiere of 'The Expendables 3' on August 11th 2014 which was held on Hollywood Boulevard at...

Actor Jason Statham's life flashed before him as he found himself trapped in a military vehicle at the bottom of the Black Sea after losing control of the truck on the set of his new action movie The Expendables 3.

The former Olympic diver told the Today show he almost drowned when the brakes failed and he ran over a jetty while test driving the vehicle in Bulgaria, and now he has expanded on the story, revealing he felt sure he would die.

"I'm in the truck... and I slam on the brakes and nothing happens... Next thing you know I've hit two cameramen (and) they literally thought I'd killed them and a split second later I'm going nine feet over the edge of this concrete jetty and I'm going down towards the Black Sea. I'm thinking, 'I've gotta get out of this'.

"I'm trying to prise myself from behind the wheel to get out the window. The windows are down. The truck hits the water and the water just slams me back and we're just sinking fast, straight to the bottom.

The tough guy's survival instinct "kicked in" and he lived to tell the tale of his near-death experience.

He explains, "You pull yourself out the window, start grabbing at the wall and try to get the surface... (but) they don't call it the Black Sea for nothing. It was a total nightmare.

"At that point, you really do understand who your friends are - I'm looking around... and I say, 'Where's Sly (Sylvester Stallone)?' and he's still on the side of the dock with his iPhone going, 'Jason, you need a towel?'"