Britney Spears' relationship with Jason Trawick may well be on the rocks, though it seems her sister Jamie Lynn is ready to marry her businessman boyfriend Jamie Watson, who tells the New York Post's Page Six that the couple are seriously discussing tying the knot.

Jamie Lynn, 21, has been wearing a ring on her engagement finger for months, though Watson, 30, insists that he gave her the piece of jewellery for her birthday, not as a signal of his intentions. "I think promise rings are dumb. And Jamie Lynn doesn't care that much. She's not too picky," he said. Watson revealed that he and Spears have discussed the possibility of marriage though are still figuring out the finer details. The couple have had their fair share of breakups, though the groom-to-be insisted, "We've been back together for a while now."

Jamie Lynn, the younger sister of global superstar Britney, splits her time between Kentwood, Los Angeles, and Nashville, where he's trying to launch a country music career. "I asked her the other night what the hell is taking so long," Watson revealed of his girlfriend's new material, "but she's really particular about her stuff. She's trying to do it right because she knows people will be watching."

Could The Bright Lights Of Las Vegas Be Calling Britney Spears?

In a bid to turn around her ill fortunes, Britney Spears will be taking on a Las Vegas residency expected to net her millions of dollars, according to a report from TMZ.

The gossip site had already reported that Spears recently split from her partner Jason Trawick (who also acted as co-conservator in her financial issues and was previously her agent). Spears also announced recently that she would not be returning to her role as a judge on X Factor, having completed her first season in the role.

A source close to Britney told TMZ that the Vegas show that she may have lined up will “eclipse” the kind of money that Celine Dion raked in with her show – and we’re talking $100 million per year for Celine, so the show’s promoters must truly believe that Britney can still get the cash registers ringing. “The deal is a go. There are several stipulations that could throw a monkey wrench in the deal, but it's basically done." The deal is being negotiated with the Caesar group – one of the biggest promoters on the strip and if it’s secured – providing that Britney can keep everything in order whilst the show’s on – will be a huge money-earner for the ‘Toxic’ singer.

Continue reading: Could The Bright Lights Of Las Vegas Be Calling Britney Spears?

By Victoria Pavlova in Lifestyle / Showbiz on 13 January 2013

After a year-long engagement, Britney Spears has broken up with fiancé Jason Trawick.

The split reportedly came after a long rocky patch in the relationship, during which the pair grew increasingly distant from each other. Brit and her former agent Trawick announced their engagement in 2011 after nearly a year of dating and it looked like a solid affair for a while, but apparently the pressures of dealing with a career for Spears and the pressure of dealing with Spears’ life for Trawick, lead to the separation.

According to the Associated Press, last April Britney reportedly asked Trawick to become one of her co-conservators, essentially meaning that he would have to deal with her affairs for her. However, apparently the role was too fatherly for Trawick and it led to the couple’s relationship fizzling out and eventually turning into nothing more than a friendship. It looks as though at least the friendship will remain intact after the split, with Spears saying in a statement, released by her publicist: "I'll always adore him and we will remain great friends." Trawick has also stated something along those same lines of his former fiancée: "I love and cherish her and her boys and we will be close forever." So, even though this is the end of a relationship, it may turn out to be just the beginning of a beautiful friendship.

Kids Behind Britney Spears And Jason Trawick's Split, It's Official

Yesterday it emerged that Britney Spears and Jason Trawick have called time on their relationship, though with little information accompanying the announcement, it caused more than one person to scratch their head and ask, why?

Well it turns out, if you believe what TMZ say anyway, that the split was down to children, children that Britney so desperately wanted and Jason just didn't. Speaking to the celebrity gossip site, a source close to the pair admitted that mother of two Britney wanted to add to her brood but unfortunately for her, Jason is "in another place."

The source also reports that Jason felt as though his life was slowly being taken away from him as he was left to take charge of Brit's massive empire since being installed as her confidant and rather that begin a family, Jason in fact wanted time apart from the pop princess. The breakup looks as though it was a clean one though, and no bad blood has been spilt between the two, who have ended things as amicably as possible.

By Lorna Greville  in Lifestyle / Showbiz on 12 January 2013

Britney Spears has had some bad weeks in the past and after a full year of pretty consistent good press, the mother of two has opted out of continuing in her contract as a judge in the X Factor, plus as TMZ have reported, the engagement between herself and Jason Trawick has been called off!

Trawick has also been a co-conservator for Spears, whose mental health had been deemed too poor for her to look after her own affairs a couple of years back. Britney's mum, Jamie, will now be the only conservator for her daughter. Trawick hadn't wanted to release the news of their breakup until after he was taken off the conservatorship. There had been rumours flying around that their relationship was a sham anyway, with heads turned when she and her then-manager eventually ended up dating, and subsequenly engaged. However now that they've broken up it simply doesn't matter whether it was a sham or not, so long as they're both happy with the choice. According to TMZ the breakup was amicable so we're guessing it was the best choice all round.

Britney has also left the X Factor, it was reported this week, apparently because she wanted to focus on her music. Mid-week charts saw her song with Will.i.Am at the top spot, so focusing on that maybe be a good choice for her. Maybe this move from TV and being engaged is simply one of personal liberation. She has had some bad weeks in the past but at a second glance, this probably isn't one of them. Good luck Brit!

Britney Split Rumors Surface: Is Her Relationship On The Rocks?

Britney Spears split rumors are in the news again, though could there be anything in the latest speculation? Rumors of a Britney Spears and Jason Trawick split have been lingering for months, though according to Hollyscoop, it looks like it's an actual possibility.

Jason is reportedly planning to leave the pop superstar, though not before The X Factor is over, because he and her whole family think Britney will take the news badly. Well, she's not exactly going to be jumping for joy now is she? A source close to the couple said, "Jason has told Britney's entire family that he's planning to leave her, so that Britney will have a support system when he breaks the bad news." The strangest part is that Jason reportedly wants to remain as Britney's manager after the break-up, meaning their relationship will become strictly business. It's almost certain that Britney will want Jason off the payroll after he dumps her, though he has reignited her career, so maybe she'll stick by him? Who knows. It all sounds pretty ridiculous to us, though we'll be keeping an ear to the ground over the coming days.

A second Britney source threw cold water on the whole thing, saying, "I haven't heard anything about [the split], but I do know they are going on vacation together for the holidays." Maybe he's treating her to a nice getaway before breaking the bad news?

Continue reading: Britney Split Rumors Surface: Is Her Relationship On The Rocks?

It has been five years since Britney Spears' epic meltdown, in which she shaved her head, had allegations of 'child neglect and abuse' made against her, was charged with a hit and run, repeatedly checked in (and out) of rehab and finally was put under the temporary co-conservatorship of her father and solicitor. She has come an extraordinarily long way since then, completely cleaning up her image. She is now engaged to Jason Trawick who earlier this year was included in the co-conservatorship, and she is working as a judge on the X-Factor. However, Britney can't leave her shady past behind has her ex-manager Sam Lufti is suing her, with a wide variety of accusations.

In the law suit, filed in 2009, Lufti accuses Spears of “libel, defamation, battery, intentional infliction of emotional distress and breach of contract” reports Fox News. Spears co-conservatorship jointly decided that it would not be good for Spears' well being for her to testify and as such will not be taking to the stand at the trial. However, Lourdes Torres, who worked as a nanny for Spears will be testifying, and the Daily Mail reports that she will attest to the emotional manipulation Britney has been under by the co-conservatorship.

In a book published by Britney's Mum called “Through the Storm: A Real Story of Fame and Fortune in a Tabloid World.” Lufti was accused of plying Spears with drugs. The trial is expected to last up to three weeks with Spears' parents and her fiancee to testify. 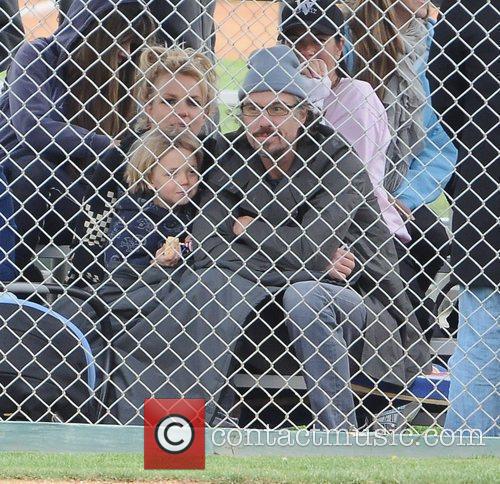