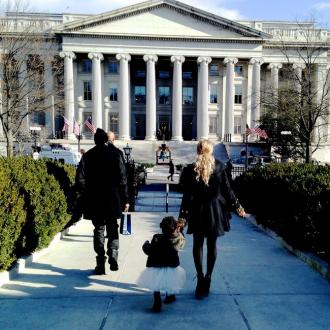 Beyoncé and husband Jay Z took daughter Blue Ivy to the White House at the weekend.

The 'Drunk In Love' singer and the rapper introduced their two-year-old daughter to guests at First Lady Michelle Obama's 50th birthday party in Washington on Saturday (18.01.14).

The adults stayed up until 2am on Sunday morning and Beyoncé posted a number of photographs on her Tumblr account from the visit.

One image shows the family walking up to the White House, while another features the singer, 32, with President Barack Obama's pet dog Sunny and her daughter standing by a Christmas tree wearing a white tutu outfit.

Beyoncé later changed into a sparkling gold dress to perform for the First Lady and her guests.

It had been reported that guests - which included Sir Paul McCartney, Jennifer Hudson, Bill and Hillary Clinton and Facebook's Sheryl Sandberg - had been ordered not to post on social media about the event.

Party-goers arrived at about 8.30pm at the East Wing of the White House and sipped cocktails in the green, blue and red rooms, as well as the State Dining Room.

American singer Ledisi, who is one of Michelle's favourite entertainers, kicked off the evening before Beyoncé performed her hits during a half-hour set.

She was also presented with a special cake by her husband to mark the occasion.

Beyoncé and Jay Z were seen enjoying lunch at Frankies Spuntino Italian restaurant in Manhattan the next day after an eventful night.