Rap Mogul Jay Z Has Fired Back At Critics Of His New Music Streaming Service Tidal After It Was Declared By Some As A Flop, Insisting The Company Is "Doing Just Fine". 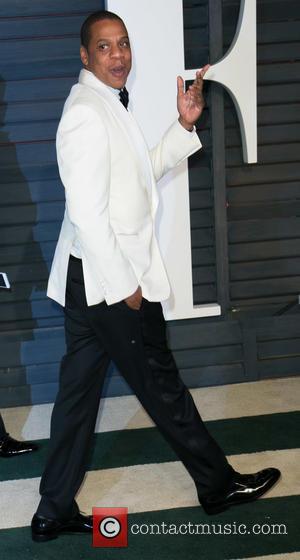 The 99 Problems hitmaker bought the brand for around $56 million (£35 million) and relaunched the firm last month (Mar15) with the backing of investors including his wife Beyonce, Madonna, Rihanna, Kanye West, Nicki Minaj, Daft Punk and Alicia Keys, among many other artists.

The big push initially helped the app surge into the iTunes download chart's top 20, but it subsequently took a hit and crashed out of the top 700, leaving rival services like Spotify and Pandora holding strong in the top five.

The news prompted some analysts to rule Tidal a spectacular failure, but on Sunday (26Apr15), Jay Z took to Twitter.com to set the record straight by posting a series of "Tidal facts" to address the claims about low subscriber figures.

In what he dubbed his "stream of consciousness", he defended Tidal's performance by insisting the company is just starting to grow, while blaming the negative publicity on his rivals' "smear campaign".

He writes, "Tidal is doing just fine. We have over 770,000 subs (subscribers). We have been in business less than one month. The iTunes Store wasn't built in a day. It took Spotify 9 years to be successful…

"We are here for the long haul. Please give us a chance to grow & get better."

Jay Z goes on to clear up confusion about song royalties, insisting the service is designed to help artists of all levels of success stay in business doing what they love, not just the superstars who joined him as Tidal co-owners.

He continues, "There are many big companies that are spending millions on a smear campaign. We are not anti-anyone, we are pro-artist & fan. We made Tidal for fans. We have more than just music. We have video, exclusive concerts, tickets for events early, live sports!... Tidal is where artists can give their fans more without the middlemen.

"Indie artists who want to work directly w/ (with) us keep 100% of their music. Tidal pays 75% royalty rate to ALL artists, writers and producers - not just the founding members on stage.

Jay Z also reveals his cousin "just moved to Nigeria to discover new talent" to demonstrate that Tidal is not just focused on mainstream acts, and he concludes, "Our actions will speak louder than words. We made Tidal to bring people the best experiences... and to help artists give that to their fans over and over again...

"We are human (even Daft Punk ha). We aren't perfect - but we are determined. #TidalFacts".