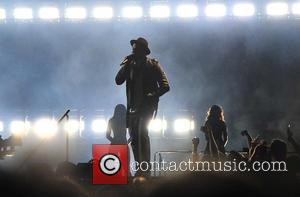 Picture: Jay-Z - Celebrity super couple, pop star Beyonce and rapper Jay-Z perform in Paris as part of their their 'On the Run Tour' - Paris,...

Jay Z has asked court officials to dismiss a copyright infringement lawsuit filed against him over the use of a single syllable in his Run This Town collaboration with Rihanna.

Executives at TufAmerica claim the rapper illegally sampled the word 'oh' from the Eddie Bo song Hook & Sling, which was recorded two decades ago, and they're seeking damages.

Their suit was filed in November (13) and now Jay Z's attorneys have entered a motion to dismiss the case, calling it misguided.

Their motion reads: "Plaintiff apparently believes that it has a monopoly on the use of the word 'oh' and that it can stop others from using this word in recorded form.

"Well-established copyright jurisprudence should allow this Court to disabuse Plaintiff of that notion. First, it is black letter law that words and short phrases are simply not protectable under the Copyright Act. Thus, Plaintiff cannot state a claim based on the alleged infringement of a generic lyric such as, 'oh', or the sound recording thereof, and Plaintiffs claims should be dismissed as a matter of law."

The TufAmerica executives previously hit the headlines when they argued the Beastie Boys illegally used short audio samples from the band Trouble Funk in several of their songs, and sued the band a day before Adam Yauch's death in 2012.