Jay-Z and his Magna Carta tour supporters Chris Martin and Timbaland take a liking to an unexpected method of transport on arriving in London. 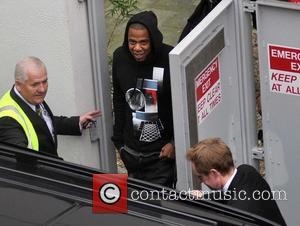 Picture: Jay Z - Jay Z arrives at Dublin airport ahead his performance at the O2 as part of his Magna Carta tour. He was escorted...

Forget chauffeur-driven limousines, Jay-Z finds the easiest way to travel to his London gigs is by Tube - and we have to say, we're in agreement.

Like many city-dwellers, the 'Holy Grail' singer doesn't see the point of trying to get round busy London in a car and has instead opted to hit the subway to attend his O2 Arena show on the UK leg of his Magna Carta world tour. He was joined by Chris Martin of Coldplay, Timbaland and a 10-person entourage as he boarded the London Underground, rendering several nearby passengers in complete shock.

This isn't the first time Jay-Z has opted for efficient but unexpected subway travel; in 2012, he made acquaintance with a grandmother named Ellen on his way to a show at the Barclay Center in Brooklyn. The woman appeared not to recognise him as she asked him if he was famous and asked what he did for a living. The name rang a bell for the lucky old dear, though, and their adorable conversation was documented in a film called 'Life+Times' on Jay-Z's culture website.

Despite the fact that the Tube is probably a lot faster than car travel in the middle of London, we have a feeling that Jay-Z's travelling ideas were mainly aimed to be a publicity stunt. It worked, nonetheless, as fans flocked to Twitter to reveal their experience. 'Seeing Jay Z on the tube getting mobbed arriving to O2!! #Buzzing Too starstruck to take a pic! #Jigga', was one fan's response, while another told his followers, 'What a riot... Just met Jay Z on the tube in London'. Superstar Jay-Z made fans' days as he hit the Underground The rapper likes to prove he's a normal guy