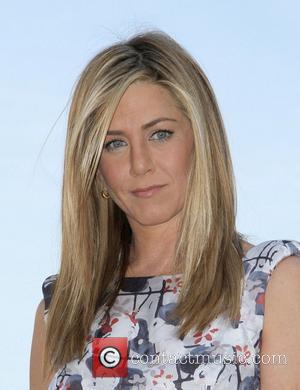 Picture: Jennifer Aniston is honored with a Star on the Hollywood Walk of Fame on Hollywood Blvd Los Angeles, California - 22.02.12

Is Jennifer Aniston pregnant? Well, after surveying new footage we can say that if she is then, boy, those babies have grown big and fast! Aniston pregnant rumours have been strong for some time now, with the press convinced that the actress is going to be having children with her current fiancé Justin Theroux. It looks like the game might be up, as footage reported by E! Online suggests that she is showing.

But before you all get excited, it turns out it’s all a spoof! That’s right, amused at the constant scrutiny surrounding her womb, Aniston has teamed up with Smartwater to make up some spoof home security tapes that see the star refer to herself as Rachel, shows herself to be “pregnant” with triplets and, distressingly, has Jimmy Kimmel and an alien toddler for sons.

Other highlights in the clip involve the 43-year-old being rude, showing off her less-than-enthusiastic workout techniques and even admitting that her much fawned-after locks are nothing more than a wig. It’s a good move by Aniston, who in the past has found herself stressed by the constant media scrutiny on her life. After all, it was the constant attention that led her and Ben Affleck to break up in 2004; now older though she seems to have a different outlook on it all, and is constantly the first to laugh at herself.